Ann-Marie is a regular client of Zealand Tattoo. She has had a couple of pieces done by Zane in the past, all of which have healed perfectly and she is extremely happy with.

When visiting her Uncle out of town he offered to pay for her to have a tattoo done as a Birthday gift, at a different studio local to him. The design was an ornamental one around her ankle with a slight ‘regal’ feel to it. The ink however, was not ‘put to skin’ to a good standard and, when Ann-Marie went surfing the next day (which is inadvisable itself) the ink ‘fell out’. When the ink fell out it also became clear that the tattooists had permanently ‘scarred’ the skin beneath.

So Ann-Marie, very sensibly, on her return to Christchurch came in to see us and asked her regular tattooist Zane to create a design for her following a similar ‘regal’ ornamental theme that would cover-up the ‘botched’ job as well as hide the scarring.

A week later Zane completed the tattoo design which Ann-Marie loved. The tattoo process itself took an hour and a half (slightly longer than it would have done should there not have been scar tissue). The tattoo healed perfectly, as they always do when performed by Zealand Tattoo, and Ann Maire loves it. There is also no sign of the scar tissue beneath.

Below are the images of how the tattoo design progressed…

In the first image you can see the ‘remnants’ of the first tattoo in black. The red and blue ink is the new design being drawn on to the skin by Zane. 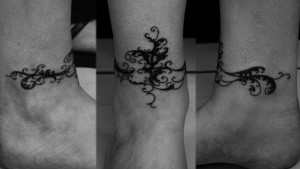 The second image is the finished tattoo design.