Once again the famous sphynx cat has been tattooed in Russia. A Russian tattoo artist has given his pet cat a tattoo identical to the one inked on his own chest.

Timur Rimut, the tattoo artist,  also has a tattoo of his cat on his forearm. The naturally hairless sphynx cat’s tattoo reads  “Carpe Diem”, which of course, is Latin for “seize the day”. 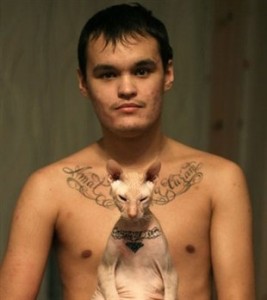 This tattoo is identical to the one inked across the chest of Mr Rimut from Tatarstan, located just west of Moscow.

In a similar case, Moscow woman, Oksana Popova, had her cat sedated for three hours so a tattoo of the Egyptian pharoah, Tutankhamun, could be inked on its chest.