Kelly was an existing Zealand Tattoo client who had a tattoo piece completed of a small dragon.

Photo # 1 Depicts the preliminary sketch of the Japanese Tiger tattoo design that Kelly wanted to have tattooed on her left side. 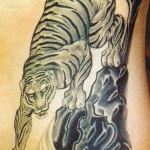 Photo # 2 Shows the final Tattoo piece that was entitled “Tattoo by Zane” and was one of five of Zane’s Tattoos which were photographed from the South Island New Zealand Tattoo Expo. All five tattoos were published and featured in the Australian Tattoo Magazine. 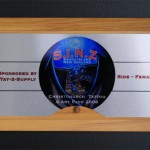